N ext to its brilliance, the most characteristic feature of Newton's mathematical career was delayed publication. Newton's priority dispute with Leibniz is a celebrated but unhappy example.

Gottfried Wilhelm Leibniz, Newton's most capable adversary, began publishing papers on calculus in , almost 20 years after Newton's discoveries commenced. The result of this temporal discrepancy was a bitter dispute that raged for nearly two decades. The ordeal began with rumors that Leibniz had borrowed ideas from Newton and rushed them into print. It ended with charges of dishonesty and outright plagiarism. The Newton-Leibniz priority dispute--which eventually extended into philosophical areas concerning the nature of God and the universe--ultimately turned on the ambiguity of priority.

It is now generally agreed that Newton and Leibniz each developed the calculus independently, and hence they are considered co-discoverers. But while Newton was the first to conceive and develop his method of fluxions, Leibniz was the first to publish his independent results. N ewton's optical research, like his mathematical investigations, began during his undergraduate years at Cambridge.

But unlike his mathematical work, Newton's studies in optics quickly became public. Shortly after his election to the Royal Society in , Newton published his first paper in the Philosophical Transactions of the Royal Society. This paper, and others that followed, drew on his undergraduate researches as well as his Lucasian lectures at Cambridge.

I n , Newton performed a number of experiments on the composition of light. Guided initially by the writings of Kepler and Descartes, Newton's main discovery was that visible white light is heterogeneous--that is, white light is composed of colors that can be considered primary. Through a brilliant series of experiments, Newton demonstrated that prisms separate rather than modify white light.

Contrary to the theories of Aristotle and other ancients, Newton held that white light is secondary and heterogeneous, while the separate colors are primary and homogeneous. Of perhaps equal importance, Newton also demonstrated that the colors of the spectrum, once thought to be qualities, correspond to an observed and quantifiable 'degree of Refrangibility.

N ewton's most famous experiment, the experimentum crucis , demonstrated his theory of the composition of light.

Briefly, in a dark room Newton allowed a narrow beam of sunlight to pass from a small hole in a window shutter through a prism, thus breaking the white light into an oblong spectrum on a board. Then, through a small aperture in the board, Newton selected a given color for example, red to pass through yet another aperture to a second prism, through which it was refracted onto a second board. What began as ordinary white light was thus dispersed through two prisms.

N ewton's 'crucial experiment' demonstrated that a selected color leaving the first prism could not be separated further by the second prism. The selected beam remained the same color, and its angle of refraction was constant throughout. Newton concluded that white light is a 'Heterogeneous mixture of differently refrangible Rays' and that colors of the spectrum cannot themselves be individually modified, but are 'Original and connate properties.

His Lucasian lectures, later published in part as Optical Lectures , supplement other researches published in the Society's Transactions dating from February The Opticks. T he Opticks of , which first appeared in English, is Newton's most comprehensive and readily accessible work on light and color. In Newton's words, the purpose of the Opticks was 'not to explain the Properties of Light by Hypotheses, but to propose and prove them by Reason and Experiments. A subtle blend of mathematical reasoning and careful observation, the Opticks became the model for experimental physics in the 18th century.

The Corpuscular Theory. B ut the Opticks contained more than experimental results. During the 17th century it was widely held that light, like sound, consisted of a wave or undulatory motion, and Newton's major critics in the field of optics--Robert Hooke and Christiaan Huygens--were articulate spokesmen for this theory. But Newton disagreed.

Although his views evolved over time, Newton's theory of light was essentially corpuscular, or particulate. In effect, since light unlike sound travels in straight lines and casts a sharp shadow, Newton suggested that light was composed of discrete particles moving in straight lines in the manner of inertial bodies. Further, since experiment had shown that the properties of the separate colors of light were constant and unchanging, so too, Newton reasoned, was the stuff of light itself-- particles.

A t various points in his career Newton in effect combined the particle and wave theories of light.

In his earliest dispute with Hooke and again in his Opticks of , Newton considered the possibility of an ethereal substance--an all-pervasive elastic material more subtle than air--that would provide a medium for the propagation of waves or vibrations. From the outset Newton rejected the basic wave models of Hooke and Huygens, perhaps because they overlooked the subtlety of periodicity.

T he question of periodicity arose with the phenomenon known as 'Newton's rings.

His most remarkable observation was that light passing through a convex lens pressed against a flat glass plate produces concentric colored rings Newton's rings with alternating dark rings. Newton attempted to explain this phenomenon by employing the particle theory in conjunction with his hypothesis of 'fits of easy transmission [refraction] and reflection.

If dark rings occurred at thicknesses of 0, 2, 4, Although Newton did not speculate on the cause of this periodicity, his initial association of 'Newton's rings' with vibrations in a medium suggests his willingness to modify but not abandon the particle theory. T he Opticks was Newton's most widely read work. Following the first edition, Latin versions appeared in and , and second and third English editions in and Perhaps the most provocative part of the Opticks is the section known as the 'Queries,' which Newton placed at the end of the book.

Here he posed questions and ventured opinions on the nature of light, matter, and the forces of nature. Newton's research in dynamics falls into three major periods: the plague years , the investigations of , following Hooke's correspondence, and the period , following Halley's visit to Cambridge. The gradual evolution of Newton's thought over these two decades illustrates the complexity of his achievement as well as the prolonged character of scientific 'discovery.

To be sure, Newton's early thoughts on gravity began in Woolsthorpe, but at the time of his famous 'moon test' Newton had yet to arrive at the concept of gravitational attraction. Early manuscripts suggest that in the mid's, Newton did not think in terms of the moon's central attraction toward the earth but rather of the moon's centrifugal tendency to recede. Under the influence of the mechanical philosophy, Newton had yet to consider the possibility of action- at-a-distance; nor was he aware of Kepler's first two planetary hypotheses. For historical, philosophical, and mathematical reasons, Newton assumed the moon's centrifugal 'endeavour' to be equal and opposite to some unknown mechanical constraint. 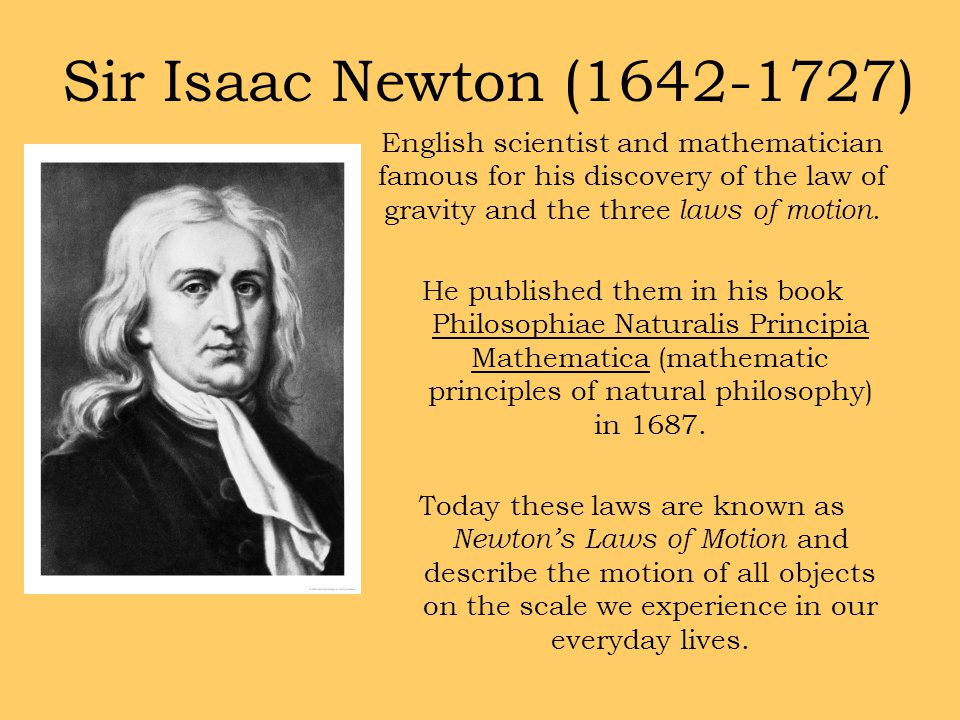 T he next step was to test the inverse square relation against empirical data. To do this Newton, in effect, compared the restraint on the moon's 'endeavour' to recede with the observed rate of acceleration of falling objects on earth. The problem was to obtain accurate data. As Newton later described it, the moon test answered 'pretty nearly. I n late and early an exchange of letters with Hooke renewed Newton's interest.

In November , nearly 15 years after the moon test, Hooke wrote Newton concerning a hypothesis presented in his Attempt to Prove the Motion of the Earth Here Hooke proposed that planetary orbits result from a tangential motion and 'an attractive motion towards the centrall body. As a result of this exchange Newton rejected his earlier notion of centrifugal tendencies in favor of central attraction.

To Halley's 'joy and amazement,' Newton apparently succeeded where he and others failed. With this, Halley's role shifted, and he proceeded to guide Newton toward publication. Halley personally financed the Principia and saw it through the press to publication in July The Principia. Newton's masterpiece is divided into three books. Book I of the Principia begins with eight definitions and three axioms, the latter now known as Newton's laws of motion.